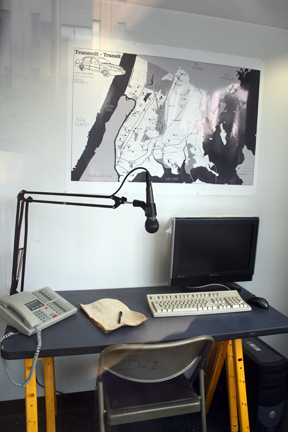 Melrose – The Longwood Gallery’s project space always seems to have interesting and thoughtful art pieces to show and this past season was no exception.
On speaking with Fermín, he explained to me his early encounters of using cab services when he arrived in the Bronx. These encounters initiated his idea for Transmit-Transit. In creating this installation, he compiled hours and hours of filming, working with cab bases and getting immersed in the cab culture so intrinsic to the transportation system of the Bronx.
Using a live radio dispatch emanating from speakers atop the roof of a car, Hatuey Ramos Fermín places the viewer inside a virtual passenger’s environment. Along with the partial segment of a vehicle, there are two monitors with headphones where viewers may listen to video interviews of cab drivers talking about their experiences, some in their own native languages. Also on the large wall is a satellite projection of the Bronx with lights displaying locations where cab bases are situated. Although there is no urgency to get to a desired location, one becomes interested in stepping outside of the gallery “box” and taking a walk down the block in order to see the virtual base Fermín created as part of his installation.
This concept of letting the viewer in allows one to hear much more clearly to the transmission and attempt to decipher the melting pot of languages being utilized to help transport locals all over the borough. Also, the top of the vehicle resting in the middle of the gallery presents another interesting feeling for someone to encounter, not as an actual passenger, but more like a fly on the wall listening in on the happenings of the local scene.
With Transmit-Transit, Fermín makes a provocative statement about the economy, its social implications and the virtual documentation of our surrounding environment.